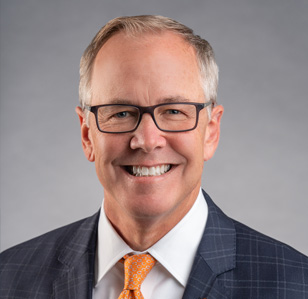 Mark J. Lodato was appointed dean of the S.I. Newhouse School of Public Communications in July 2020. He leads a team that includes some 200 faculty and staff and approximately 2,400 students.

Since his arrival, Lodato has invested more than $1 million in efforts devoted to inclusivity, diversity, equity and accessibility (IDEA) and has led efforts resulting in an increase of diverse students, faculty and staff. Among those are the establishment of a new associate dean position, IDEA subcommittees on the Newhouse Advisory Board and Newhouse 44 young alumni board, and awards and scholarships for students of color that focus on creating a pipeline of talent with the goal of diversifying media.

Additionally, Lodato is spearheading efforts to build an increased presence for the Newhouse School in Washington, D.C., most notably through the planned establishment of the Center for Democracy, Journalism and Citizenship in partnership with the Maxwell School of Citizenship and Public Affairs. The center will bolster and expand opportunities for faculty thought leadership, collaborative research and an enhanced student experience.

He was appointed to the Hearst Foundation’s Journalism Awards Steering Committee in 2022.

Lodato joined the Newhouse School after more than 14 years at Arizona State University’s Walter Cronkite School of Journalism and Mass Communication, where he served as associate dean and associate general manager at Arizona PBS. There, he established new partnerships with leading media corporations and oversaw broadcast news operations, including the national award-winning “Cronkite News.” Under his leadership, Cronkite School broadcast students consistently ranked among the nation’s best in premier journalism competitions.

He is the 2014 recipient of the ASU Faculty Achievement Award for Excellence in Curricular Innovation and a member of the Scripps Howard Academic Leadership Academy class of 2013. He has served on multiple site teams for the Accrediting Council on Education in Journalism and Mass Communications.

Lodato spent 16 years as an award-winning television reporter and anchor for television stations in Washington, D.C., San Francisco, Phoenix and Ft. Myers, Florida. A native of Menlo Park, California, Lodato holds a bachelor’s degree from the University of Missouri and a master’s degree in higher education administration from Arizona State University.