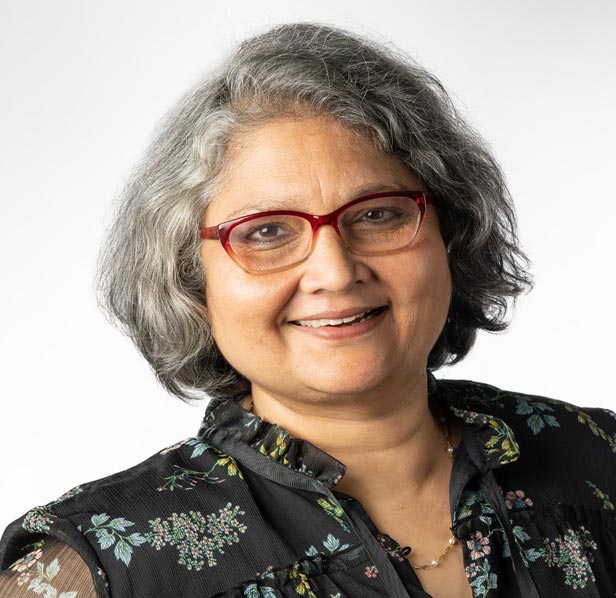 Tula Goenka is a filmmaker, author, human rights activist and professor. She teaches courses in multimedia storytelling, film production and Indian cinema, and started her filmmaking career as an editor for Mira Nair, Spike Lee and James Ivory, among others. She now produces and edits her own documentaries, including the award-winning PBS film “Dancing On Mother Earth,” about singer/songwriter Joanne Shenandoah; “El Charango,” about the musical instrument from Bolivia; and “Likhiya: Writing Stories With Mithila Art” a series of short films on artists from Madhubani, Bihar in India.

Goenka is the author of “Not Just Bollywood: Indian Directors Speak.” In 2008, Goenka created the SUBollywood program offered through Syracuse University Abroad, and has taken more than 50 Newhouse students to Mumbai for the month-long immersion. She co-created the annual SU Rising event, a candlelight vigil to stop sexual assault on the Syracuse University campus, and has served on the Chancellor’s Task Force on Sexual and Relationship Violence. She is the founder and co-director of the annual Syracuse University Human Rights Film Festival and Digital Witness Symposium.

Goenka was born and raised in India and continues to be very involved in the South Asian community in America. She served as co-director of the federally funded South Asia Center, part of the Moynihan Institute of Global Affairs at Syracuse University's Maxwell School of Citizenship and Public Affairs from 2012-14. She is affiliated with Women's and Gender Studies, as well as South Asian Studies at Syracuse University.

She is a co-founder of Sakhi for South Asian Women, a New York City-based organization working to end violence against women. She also served on the board of directors of Breakthrough, an international human rights organization for 11 years.