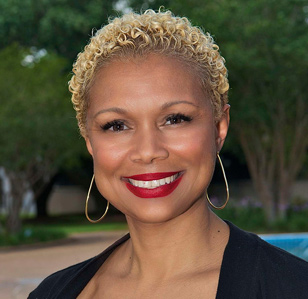 Rockell Brown Burton is an experienced academic leader and accomplished researcher with a passion for cultivating impactful, mutually beneficial relationships.

Brown Burton is a two-time HBCU graduate with nearly 20 years of experience in higher education as both a faculty member and administrator. A self-described “serial collaborator,” she says she is committed to establishing pathways and pipelines for marginalized and underrepresented groups in the academy and beyond.

Brown Burton joined Newhouse from Texas Southern University (TSU), where she served as interim dean of the School of Communication for three years. Under her leadership, the school formed several professional partnerships, including a program established in partnership with ABC News that provided students with the opportunity to cover the Democratic debate at Texas Southern University in 2019. Other partnerships include HBCU Game Day, AT&T Regional Sports Net, the Monterrey Jazz Festival and Houston Methodist Hospital TV studios, where Burton developed internships for students from historically underrepresented and marginalized groups. As interim dean, she also established the first School of Communication Advisory Board and oversaw the launch of a student multimedia streaming operation.

Brown Burton also has held positions as associate professor of radio, television and film, interim chair of the Department of Speech Communication and director of graduate studies, where she led the charge to overhaul the curriculum and create a more welcoming and inclusive environment for students of color.

Brown Burton was an AEJMC Institute for Diverse Leadership in Journalism and Communication Fellow for 2019-20 and was a nominee for the Orlando L. Taylor Distinguished Scholarship Award in Africana Communication. She was named Teacher of the Year and Stellar Communicator by the School of Communication in 2009.