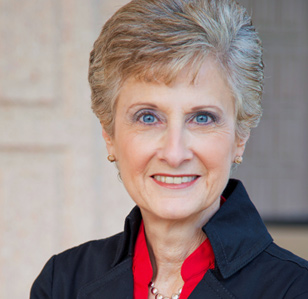 Robin Forman Howard has been the director of Syracuse University’s Los Angeles semester program since 2013. She joined the SULA Semester team in 2009 as an adjunct professor. Robin worked in almost every field of feature film and television production in her over 30-year career in the entertainment industry and brings that depth of knowledge to the SULA semester program every day.

Beginning her entertainment career in the field of post-production, Robin was the post-production supervisor on Sydney Pollack’s "Out of Africa." She worked her way up to line producing "Crisscross" starring Goldie Hawn and "Fearless" starring Jeff Bridges.  She produced HBO’s "The Cherokee Kid" starring Sinbad, NBC’s "Because Mommy Works" starring Anne Archer and "Cloned" starring Elizabeth Perkins.

Culminating her entertainment career as President of Spring Creek Television, she developed and served as executive producer on "Iron Jawed Angels" for HBO. This $25 million film about the women’s suffrage movement in America, starring Hilary Swank and Angelica Huston, had its world premiere at the Sundance Film Festival and was nominated for 5 Emmys, 3 Golden Globes and the prestigious Humanitas award. It was given special recognition by the United States Women’s Congressional Caucus, screened in the Library of Congress and is routinely screened in women’s studies programs in colleges and universities throughout the nation.

Robin was raised in Brooklyn, New York and received a BA in televisoin/radio from Brooklyn College and a master's degree from Syracuse University where she attended the Newhouse School on a teaching fellowship.

Robin is a member of the Producers Guild of America and the Television Academy.