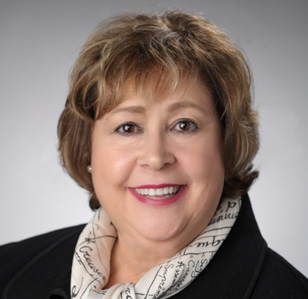 Maria Russell joined the Newhouse public relations faculty in September 1986 after more than 14 years of professional public relations practice. As chair of the PR department for four terms, she oversaw its tremendous growth and innovative programming, including the school's first venture into executive education with the 1995 creation of an interdisciplinary, limited-residency distance learning program for mid-career public relations professionals leading to a master's degree in communications management. In July 2016, she assumed executive education responsibilities for the entire school and conducts programs across the U.S. and in Canada, Brazil and Costa Rica.

Russell’s career has included positions as vice president of communications for the Greater Syracuse Chamber of Commerce; consultant for the Greater Syracuse Program, a four-year economic development campaign for the Central New York area; director of community relations for the United Way of Central New York; and editorial assistant/writer for the SUNY College of Environmental Science and Forestry.

Russell's professional accomplishments have brought her numerous national communications awards and recognition from United Way of America; the American Chamber of Commerce Executives (ACCE); the Chamber of Commerce of the United States; and the Public Relations Society of America (PRSA). She is accredited by PRSA, and was inducted into PRSA's College of Fellows in 1992 and named PRSA's "Educator of the Year" in 1997. In 1998, she was elected to a two-year term on PRSA's National Board of Directors and served as 2001 secretary and 2004 treasurer of the 20,000-member professional society. She was a trustee of the PRSA Foundation from 2006 to 2012. In 1999, she was selected for membership in The Arthur W. Page Society. Russell currently serves on the board of the Plank Center for Public Relations Studies at the University of Alabama and is the 2013 chair of PRSA’s College of Fellows. In 2012, PRSA-NY honored her with the Philip Dorf Award for outstanding mentorship of students and young professionals.

Russell is a co-author of a book about the media coverage of the bombing of Pan Am Flight 103, in which her work dealt with the role and performance of public relations practitioners during the tragedy. Subsequent research interests have included examinations of crisis communications preparedness in various United States cities; other studies dealt with crisis preparedness in the international airline industry.

Russell is active in numerous professional and civic activities. From 2000 to 2003, she chaired PRSA’s Task Force on Professional Development and was instrumental in leading PRSA to expanded and enhanced offerings for its members and to the introduction of e-learning. She convened the first-of-its-kind Summit on Life-Long Learning in Public Relations, bringing together more than 12 professional and academic organizations interested in furthering the profession through education. She has been a member of the Commission on Public Relations Education for more than 14 years. She serves as a judge for PRSA’s Silver Anvil competition, the Page Society's case study competition and the Newhouse School's Mirror Awards competition. She is a review team member for the Accrediting Council on Education in Journalism and Mass Communications.

Russell was a long-time member of the faculty for the U.S. Chamber of Commerce’s Institute for Organization Management and for Motorola University. Her consulting clients have included several major United States companies and public relations firms.