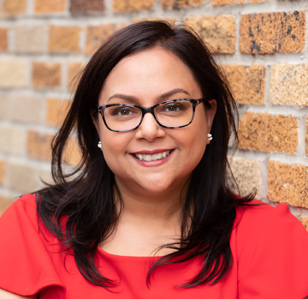 Manashi Mukherjee G'07 is a TV executive by day (and night, and weekends) and when she has free time, she loves traveling, live music, riding her bike and cooking for her friends.

Mukherjee's background is in news and journalism, having started her career at CNN and working there in various roles from 1998-2012. Additionally, she freelanced as a reporter, producer and media consultant before and after attending the Newhouse School's Goldring arts journalism and communications program from 2006-2007.

Currently, she is the director of studio operations at NBC. She manages studios and technical operations for any network shows at 30 Rock. In her previous role as technical manager, Mukherjee worked on numerous national productions, including SNL and the Olympics. In her current role, she's heading up a DEI initiative which will increase outreach for jobs in television to previously underrepresented groups.

In October 2021, she started The Minority League podcast with her journalist friend, Anar Virji. They wanted to examine minorities fitting into spaces that aren’t normally designed for them. This season, they are exploring race in hockey.

At all times a baseball fan (Go Braves!), Mukherjee developed a fondness for hockey during the pandemic. She has always rooted for the underdog, and she loves a good "worst to first" sports story. She also volunteers time mentoring co-workers who want to advance in the corporate world of TV.