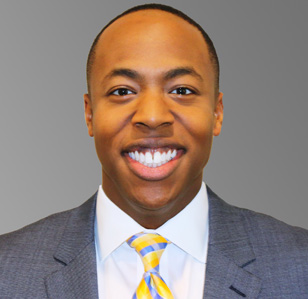 Julian Glover is an Emmy-nominated and Associated Press Award-winning news reporter and anchor. An early graduate of the online M.S, in communications program, Glover- uses his unique perspective and firsthand knowledge of the coursework to advocate students' success from the outset of their Newhouse journey. He brings his industry experience to the classroom to engage students in critical discussions about events and news shaping our field.

While joining the Newhouse faculty as an adjunct professor, Julian is a reporter and anchor in San Francisco at ABC’s owned and operated ABC7 News (KGO). Julian is based in Silicon Valley and covers everything from Tech to Tesla, Super Bowl LIV, and most recently one of the original epicenters of the COVID-19 pandemic. He uses the skills gained in the Journalism Innovation specialization to enhance his storytelling every day.

Prior to making the move to the West Coast he worked as morning anchor at CBS19-WOIO in Cleveland, OH; as an anchor and reporter at WAVE3 News in Louisville, KY; as a reporter at FOX4-WFTX in Fort Myers, FL; and as a producer in Miami at WFOR. He was born and raised in the D.C. Metro Area.