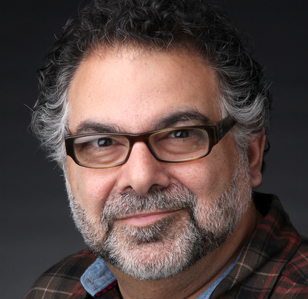 Jim Shahin is a professor emeritus of journalism and an accomplished magazine writer and editor. He has taught courses on writing, editing, journalism ethics and history, introductory journalism, magazines and arts criticism, among others.

In the classroom, Shahin has emphasized diversity, with culturally inclusive assignments, readings and lectures. Outside the classroom, he organized 2019’s hugely successful two-day Race and the Media Symposium. He launched and oversaw the magazine department's speaker series, which brought luminaries from the industry to campus, including the first Black editor of a Condé Nast magazine, Keija Minor; the two editors behind the landmark New York magazine #TheEmptyChair cover, Jody Quon and Noreen Malone; and Teen Vogue and Them founder Phillip Picardi, among many others. Shahin was instrumental in bringing New York Times writer and The 1619 Project creator Nikole Hannah-Jones to campus for a speaking engagement.

His teaching combines innovation and fundamentals. He was an early adopter of social media as an instructional tool, used group tweet to facilitate classroom discussion and integrated lessons on multimedia into his courses. When COVID-19 began roiling America in March 2020, he swiftly pivoted his Critical Writing class from writing reviews to creating an online publication called Fermata, which explored the impact of the virus on artists. He co-taught a Newhouse graduate-level digital magazine capstone project called Bellwethr that won the Society of Professional Journalists award for the nation's Best Digital-Only Student Publication and the Association for Education in Journalism and Mass Communication (AEJMC) award for Start-Up Magazine Project (Team). He helped shape the curriculum for the recently created magazine, news and digital journalism department.

Shahin’s work has appeared in the New York Times, the Washington Post, GQ, The Columbia Journalism Review, Texas Monthly, Southern Living, Spin, Esquire.com, Bon Appetit.com and NPR’s TheSalt.com, among others. He has won a Lowell Thomas Travel Journalism Award and a Women in Communications Award; his work was anthologized in Best Food Writing 2015. His Washington Post column, Smoke Signals, was a finalist for Best Food Focused Column from the International Association of Culinary Professionals and a finalist for Best Food Column from the Association of Food Journalists.

After graduating from the University of Michigan, Shahin worked as a reporter for the Austin American-Stateman and later became the first politics editor at the Austin Chronicle, where he wrote a weekly column and oversaw the section’s significant growth. He has since freelanced widely.