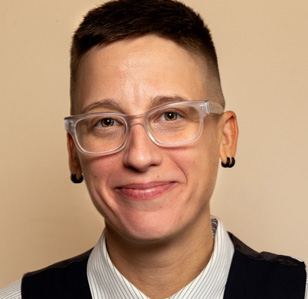 Jennifer Grygiel* is a social media professional who most recently served as social business and emerging media manager and assistant vice president at State Street Corporation in Boston. There, they developed a social listening and marketing data and analytics program and was the lead project manager for the Social Intranet Project, which received an IABC Gold Quill Merit Award. Grygiel’s social listening work has also been recognized and received a Gold Wommy for Social Media Monitoring Implementation from Womma (Word of Mouth Marketing Association).

Over the course of their career they served as the executive director for public affairs and communications and chief of staff at the Committee on Capital Markets Regulation, a Cambridge, Massachusetts-based nonpartisan research organization dedicated to improving the regulation of financial markets. Grygiel has also worked at the Program on International Financial Systems at Harvard Law School and is the founder of No Gay Left Behind, which advocates for the development of virtual gay-straight alliances (VGSAs) via social media.

Their research related to police use of social media has been published in Journalism Practice and featured in top outlets such as MIT’s Tech Review. They have also contributed research in the area of communications law and policy in the Journal of Telecommunications Policy related to social media content moderation, published a legal test for defining and identifying state media in UC Irvine’s Law Review, and had their state media research featured in the New York Times which spurred an oversight investigations by both the Senate Committee on Foreign Relations and the House Committee on Foreign Affairs.

They earned a bachelor’s in art and education from St. Lawrence University and completed the graduate program in management with a concentration in finance and control from Harvard Extension School.

For more information, please see their personal website and disclosures.