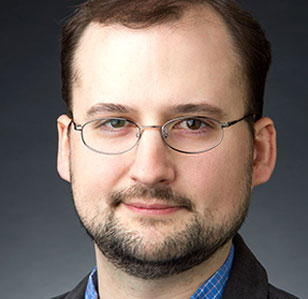 Jeff Passetti is one of the rare designers whose knowledge of design is matched by his ability to program. He utilizes Adobe XD, Sketch, Figma, and Invision to design and prototype. He builds in HTML, CSS, Javascript, PHP, Wordpress, React and Next.js. In addition to being a full time designer for the Newhouse School, he has been an adjunct professor at Syracuse University for over a decade, teaching web design and development and mentoring award-winning student projects.

In 2019 he was one of the instructors in Careers in Code, a 24 week coding bootcamp in downtown Syracuse that taught computer programming to women and minorities to help combat poverty in Central NY.

His work on Handshake Magazine, World Journalism and News21: el Neuvo Normal was awarded the Society of Professional Journalists' Best Student Magazine award in 2011; the Online News Association's Online Video Journalism Award in 2011; and the Society for News Design's Best of Digital Design in 2012, respectively.

He has also worked on websites for the Pan-Am tragedy, The Fall Workshop and The Field Report.