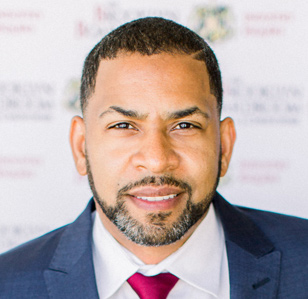 As an attorney and professor, J. Christopher Hamilton’s work is focused on the monetization of content and leveraging distribution outlets in the television, film and digital streaming industries. In addition to brokering content deals and teaching about their dynamic revenue and financing models, Hamilton is also a passionate executive producer.

Prior to joining Newhouse, Hamilton worked as a business affairs executive and attorney for media conglomerates such as ViacomCBS, Disney, Warner Media and then Lionsgate, as vice president of Digital Studios, Over-the-Top Services and International Co-Productions. After a career in cable television (MTV Networks), network television (ABC Studios) and over-the-top streaming (Kevin Hart’s “Laugh Out Loud Network”), Hamilton embarked on an entrepreneurial path as co-owner of streaming service Black and Sexy TV and closed development and distribution deals with networks like HBO and BET.

Hamilton is also a frequent guest speaker at film festivals (South by Southwest and PAFF), media companies (Verizon-Yahoo) and professional organizations (the Black Entertainment and Sports Lawyers Association and Ghetto Film School), and the co-founder of a non-profit organization, Syracuse B.L.A.C., supporting the professional development of Black law students and attorneys.

Hamilton, a native of Brooklyn, is a graduate of Binghamton University, where he earned a B.A. in sociology and cinematography. He earned a Juris Doctorate and master's degree in television, radio and film from Syracuse University. Hamilton also completed an executive training program at Harvard Business School through a fellowship underwritten by Lifetime Television.

Crowdfunding and Cryptocurrency – a New Conduit to Film Finance (Rutgers Law Journal)
An examination of the traditional and new pathways to funding content based the impact of Covid-19, shrinking capital markets and shifting business landscape due to the streaming wars and content bubble.

When They See Us: An Unshaken History of Racism in America (published in March 2020/ Journal of Family Theory and Review) - An analysis on how this Emmy award winning series on Netflix can be used as prosocial content to deconstruct institutional racism and operate as a change agent throughout our society.

How Movie Theaters Can Avoid Extinction: "It's a really practical and effective step forward," said J. Christopher Hamilton, an assistant professor of television, radio, and film at Syracuse University, and a former executive at Disney and WarnerMedia. "It will usher in more variations."

NEWSNATION: Will Smith: Buy or Sell?

THE SKIMM: Is Travis Scott to Blame for the Astroworld Tragedy?

THE SKIMM: Why is Rap Music Still on Trial?