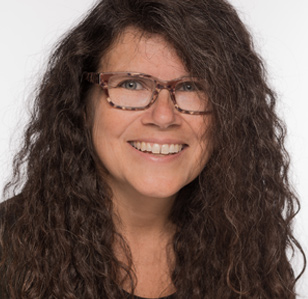 Claudia Strong teaches various graphic design and writing courses to undergraduate, graduate and military students. On the design side, she teaches majors and non-majors fundamental visual principles and strategies; she also teaches how to create a digital typeface from scratch, how to use typography powerfully, and how to design magazines, books and newspapers. On the writing side, she helps photographers and videographers hone the writing skills they need to create compelling captions, titles, story summaries, proposals and other text that helps support their visual projects.

In what has turned out to be a delightfully varied communications career, Strong began as a newspaper journalist after earning a Bachelor of Science degree from Northwestern University’s Medill School of Journalism. She then moved into the freelance world and now teaches graphic design and writing at the Newhouse School.

After starting out as a reporter at the Statesman Journal in Salem, Oregon, Strong moved to The Orange County (California) Register, where she worked first as an editor for its Community sections and then as a copy editor for the daily paper. At the time, The Register was a nationally distinguished newspaper known for its compelling photography and trailblazing design. During her early years there, Strong became more and more intrigued by the power of visuals to tell important stories and make a difference, so she sought out projects that gave her room to stretch into that side of the industry. When the first Apple computer made its debut in the newsroom, she volunteered without hesitation to help launch the paper’s digital design era — and her own design career with it. She officially changed jobs, taking with her the respect for words and thoughtful wordsmithing that would inform her work as a designer. In this new role, Strong designed for all the paper’s news and feature sections, as well as special sections and books, and went on to win honors for her work, including from the Lowell Thomas Awards and the Society for News Design.

Eventually, Strong left The Register and began pursuing a wider range of visual storytelling and communication opportunities, focusing primarily on arts-related projects. This experience included promotional design, book design, web design, book editing, picture editing and multimedia projects for commercial, editorial and non-profit clients. During that time, she also co-founded and co-led Photo Night, a popular and beloved grass-roots organization created to quench a growing thirst for camaraderie, community and discussion among Southern California press photographers. Eventually spawning similar groups around the US and beyond, Photo Night drew as many as 500 people for a single event and photographers from as far north as San Francisco and as far south as Baja, Mexico.

Now happily living and teaching at the corner of words and visuals, Strong mentors the next generation of visual communicators as she introduces students from all disciplines to the power of design. Outside of class, she served for many years as the Syracuse University liaison to the Society for News Design, helping to coordinate and facilitate the judging of its annual international competition; she regularly tackles assorted departmental projects; and, in a perfect convergence of her love for words and design, Strong is working on a children’s alphabet book that features animal illustrations designed using only the letters in their names.

Originally from Chile and fluent in Spanish, in the rest of her life, Strong spends a lot of time sharing epic adventures with her family, running, camping, unapologetically looking for opportunities to feed her brainstorming addiction, and doing her best to produce an occasional essay for her blog, twowomenwriting.com.